One of the major issues confronting museums as they seek new methodologies of display and interpretation is how to incorporate oral histories into their exhibitionary practices. There is always a technological issue and, related to this, costs which may be involved. Sometimes audio bells are used, in some instances excerpts from interviews are shown in an audio-visual form on monitors, audio-wands, headsets and mobile phones are increasingly used in art galleries, and in older technologies visitors are required lift up a handset and listen to a recording.

The Lwandle Museum has been unable to afford any of these devices and instead has made extensive use of presenting an edited transcribed version as written text. In addition tour guides draw upon oral histories in their renditions to visitors. But the ways oral histories are used goes beyond a mere question of technology and raises issues about the ways voices are constantly mediated. Chrischene Julius of the District Six Museum has written an important article, ‘Digging Deeper than the eye approves’, published in Kronos: Southern African Histories, 34 (2008), which examines these processes. She maintains that although claims are constantly being made to represent voices through oral histories in museums, through the performance of interviewing, translation, transcription and editing what occurs is a process of curating voices for the purposes of the museum. In the processes of making decisions about how to make the oral visual memories can become contained and much more circumscribed than was originally intended.

On 16 April 2010 students from the African Programme in Museum and Heritage Studies at UWC and fellows of the Centre for Humanities Research visited the museum to analyse how oral histories are being curated and to discuss how the guides in the new tours to restored Hostel 33 might make use of oral histories. 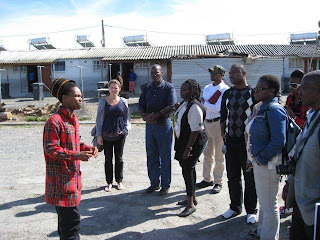 Lunga Smile relates stories of Lwandle to African Programme in Museum and Heritage Studies students and staff and Centre for Humanities Research fellows from UWC. Photograph: Leslie Witz
Different modes for the curation of oral histories were discerned in the museum. In Iimbali zeKhaya (Stories of Home) extracts from interview are presented to accompany large photographs of individuals. These are mainly presented as parts of a narration by the interviewee and appeared in English and isiXhosa. The oral appears then as the voice of the image. In the newer exhibition, Abavelisi Bengingqi yaseLwandle (Lwandle Designers), voice is again rendered in textual form of edited extracts in isiXhosa and English to accompany photographs of designers and their work, but in this case the interviews are presented as a conversation between the researchers and the interviewees. Interventions, questions, interjections and responses of the interviewers are incorporated into the display. In this manner an attempt is made to highlight the dialogic nature of oral histories, something which hardly appears in either written texts or in museum displays. 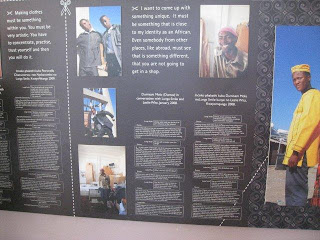 Detail of Lwandle Designers exhibition: Dumisani Molo in conversation with Lunga Smile and Leslie Witz. Here the voices of both interviewer and interviewee are graphically displayed. Photograph: Leslie Witz.

What became apparent throughout this discussion is that the way that the museum had made curatorial choices of representing oral histories, so much so that some of the students were asserting that the ‘voice’ was not that of the interviewees but that of the museum. This raised a heated debate about the intentions of oral history and its supposed articulation of democratic ideals and transformatory strategies. Although no conclusion was reached it was evident that such an idealist notion of oral history needed to be abandoned and replaced by a methodology that consciously sought to represent, in exhibition, the ways that voices are mediated.
This left us with the question of how the museum is going to incorporate oral histories into the tour narratives of Hostel 33. From very early on the museum decided against installing electronic equipment in the hostel, both for security reasons and the costs involved.
Importantly, past experiences over the past ten years, has shown that the personalized guided narration is the most effective manner of representing notions of experience. Two strategies have been employed. The first is an ambitious oral history project that is being carried out by the museum with Grade 9 scholars from local schools, Khanyolwethu, Rusthof and Simunyene. Drawing on the museum’s experience in its partnership with the District Six Museum in a Youth ambassadors’ programme in 2008, the students are learning techniques of interviewing, contributing to a growing oral history collection in the museum and hopefully becoming advocates for the museum in their communities. This programme is being led by the museum’s education officer, Lundi Mama. The museum has also identified individuals who have lived in the hostels in different periods and is conducting a series of interviews with them. Finally, as community members become involved in the restoration process they also recall moments and experiences of their past lives when Lwandle was a place of hostels. Hostel 33 then serves, in the words of Pierre Nora, as an aide memoire.
From these interviews and reminiscences the museum will develop one or two life stories which will the form the basis of the tour guide narrations. The idea is to move away from a generalized account to one that will resonate through the individual account. Photographs of the hostel, and documents such as pass books are being reproduced to create additional visual and tangible remnants. The oral histories, together with these selected and crafted arfticats will enable the museum to imagine, image and represent lives for visitors to Hostel 33.
Posted by Noëleen Murray at 10:43 AM

Labels: post by Leslie Witz: Visit by students and Fellows from UWC