One of the key objectives of the Hostel33 Restoration Project has been to identify and make use of local contractors in the building and exhibition processes. At the outset of the project the Museum embarked on a programme of identifying local companies with appropriate skills for the projects needs. It was decided that local companies and individuals from Lwandle and Nomzamo should be given the opportunity to conduct elements of the work, and where skills were not available locally that the museum would then look further afield. From names suggested by museum staff, board members and others, Project Manager Renchius van der Merwe set about interviewing prospective contractors for the minor building works required. It was eventually decided to employ the services of Nomzamo based contractor Laings Koti, whose thirty years experience in building and his sensitive approach seemed to be ideally suited for the works. 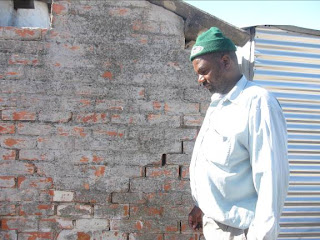 Nomzamo based building contractor Laings Koti inspects the state of brickwork on site as part of an initial assessment of the works required. Photograph: Noeleen Murray.

It was no surprise to find that Laings had come to Lwandle as a migrant labourer himself in the 1970s and had been a hostel dweller at Lwandle and elsewhere in the Western Cape working in the local construction industry. Laings immediately related to the project and set about making useful suggestions about how to go about the work proposed, as well as providing insights and accounts of hostel life as he walked through the interior of Hostel 33. 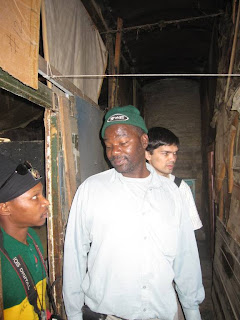 Laings related stories of his own experiences as a migrant labourer to Lunga Smile inside Hostel33. Photograph: Noeleen Murray.

Renchius van der Merwe carefully specified the extent of the works required and the proposed phasing of work, emphasising the need to work sensitively and practically without damaging the historic fabric of the building and Laings Koti surveyed the state of the brickwork closely. 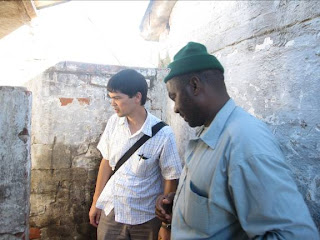 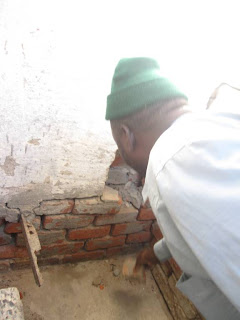 The next step was to submit a cost estimate for the initial works discussed. Once this was received and approved by Mr Molo and Leslie Witz of the Museum’s Board – the Financial Officer and Chairperson respectively, the quote was accepted. In the last week of April 2010 Laings’ team of workers went on site for the initial works. Bricklayers Elliot Maphatlalatsa Katlego assisted by Seyabata Thantsi and Sithembele Nqomfane began the process of rebuilding the wall at the entrance to the bucket toilet area that had disappeared around 2005, and removing the posts and washing lines that had been added to the space in front of Hostel 33 since the Hostels-to-Homes project. 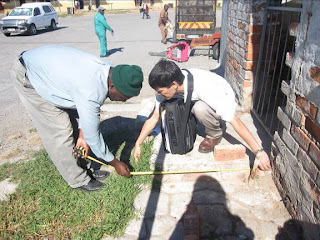 On site measurements were checked prior to commencing work. Photograph: Noeleen Murray. 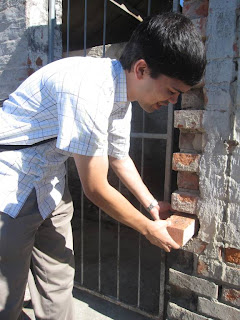 Renchius van der Merwe explains the research process behind the decision to use the Corobrik ROK bricks, explaining that they were the closest fit and that it would be necessary to use the smooth side on the outside face of the new wall. Photograph: Noeleen Murray. 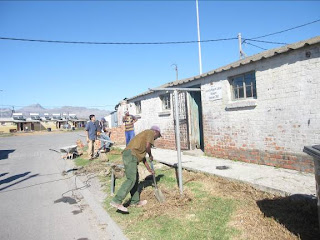 Going on site Sithembele Nqomfane starts to dismantle and dig out the washing lines, taking care to ensure that they could be reused as they had been promised to Kholiswa Ngcane who runs a charitable soup kitchen from her home. Photograph: Noeleen Murray. 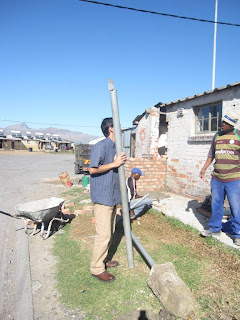 Renchius holds one of the four poles constructed in front of Hostel33 prior to it being designated a heritage space, were removed to clear the front facade of the hostel. Photograph: Noeleen Murray. 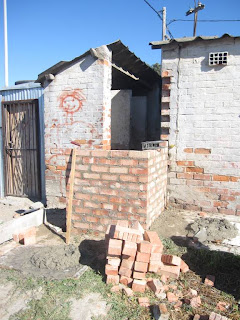 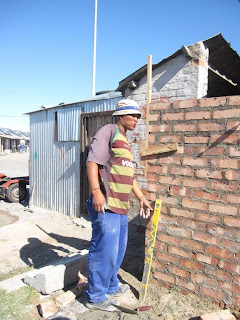 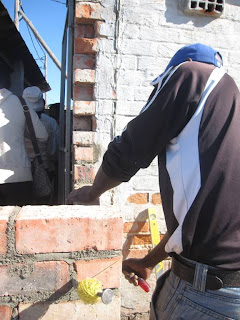 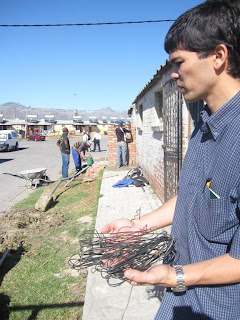 Renchius carefully saves the washing line cables which are used to replace those missing on neighbours' washing lines and the rest are sent to complete the washing line to be reinstalled at Kholiswa Ngcane's home from which she runs a soup kitchen. Photograph: Noeleen Murray. 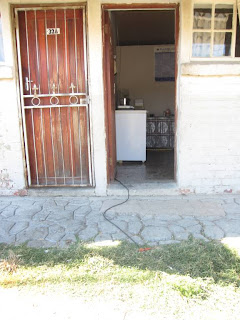 Without an electrical connection yest at Hostel33, the kind favour of neighbours enabled power to be supplied for the power tools necessary on site. Photograph: Noeleen Murray. 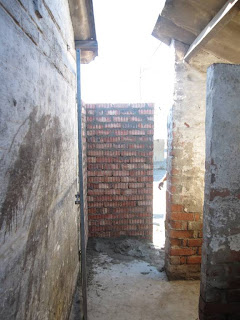 View of the new wall from the interior of the bucket toilet area, clearly showing the ribbed side of the new bricks, prior to being platered using the original 'bagged' finish. Photograph: Noeleen Murray. 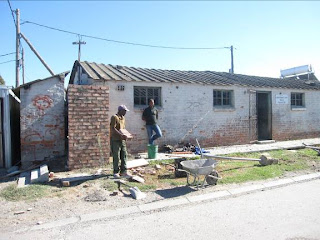 The extent of the new wall prior to being bagged. Photograph: Noeleen Murray. 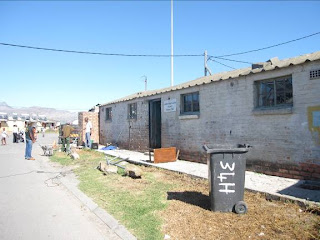 View from the street showing Hostel33, no longer obscured from view by poles and washing lines and with the rebuilt screen wall at the bucket toilet area. Pjotograpoh: Noeleen Murray. 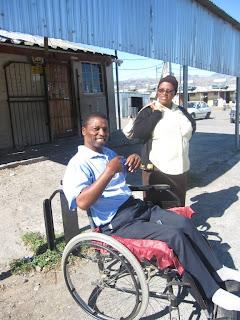 Board member Chris Meje arrives on site to inspect the works completed by the contractor he had recommended! Photograph: Noeleen Murray. 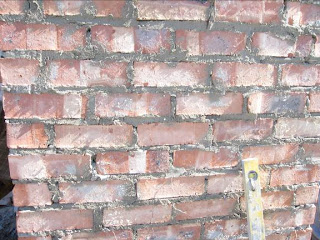 Detail of the newly built wall prior to being bagged. Photograph: Noeleen Murray. 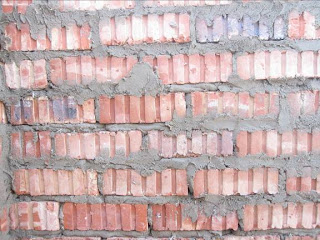 Detail of the ribbed side of the new wall, prior to being concealed through being bagged. Photograph: Noeleen Murray. 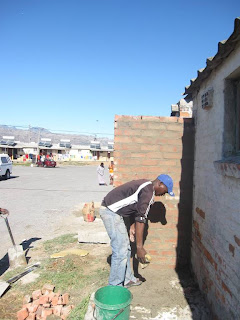 The new wall receives a 'bagged' plaster finish to match the rest of the building. Photograph: Noeleen Murray. 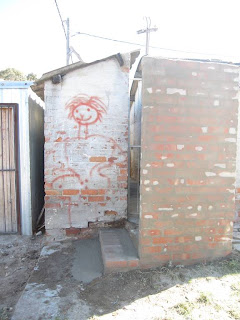 Side view showing the reconstructed steps, in the position of the old steps as revealed by inspection on site and confirmed by Chris Meje and others who had previously used this and similar buildings. Photograph: Noeleen Murray. 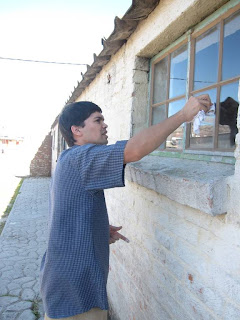 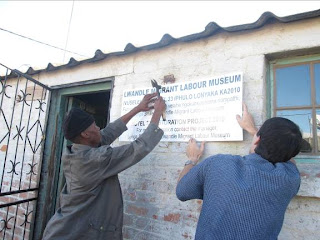 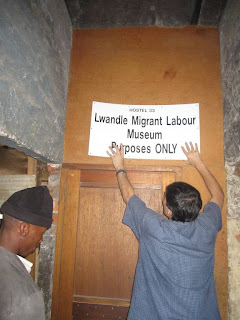 As the first phase of the building works is completed, and in keeping the LMLM's process approach, the old sign is moved inside Hostel33, indicating another layer in the history of the building's use. Photograph: Noeleen Murray.
Posted by Noëleen Murray at 11:50 AM