Last weekend, on Workers’ Day, 1 May 2010, the Lwandle Migrant Labour Museum celebrated its 10th birthday. The Museum hosted a birthday party to which it invited its many friends, collaborators and supporters as a way of thanking everyone who has contributed to the continued existence of the museum. Community members and friends of the museum were treated to performances by groups associated with the Museum. Ten years ago the Uzuko Gospel Choir sang at the Museum’s Launch and they returned, along with Simpiwe Konono (now one of the Museum’s employees as a Tour Guide and the Master of Ceremonies for the day’s celebration programmes) to perform the national anthem, poignantly opening the day’s celebrations.

Lwandle sensations – acapella group the Red Dazzlers performed a number of pieces starting with a piece about Xenophobia – appropriately performed in the space of the migrant museum. This was followed by speeches by co-founder of the museum, Charmian ‘Mama’ Plummer and the Chair of the Board of the museum, Leslie WItz. Next up were spoken performances by local poets whose work won awards as part of the recent Lwandle Museum poetry competition, and dancing by the Rise and Shine dance group (also closely associated with the Museum) and later a football match between the teams from local taxi-drivers and the police. It was a remarkable occasion. As Leslie Witz has written subsequently:

‘Ten years ago, when the museum was opened by the poet Sandile Dikeni no-one had thought it would last this long. But through the commitment of its staff and board and the support of the community it has defied expectations. The Lwandle Migrant Labour Museum today challenges the traditional role of a museum and many other more well-established museums in the country are taking a leaf out of its book.’

The birthday was also an important moment in the restoration process currently underway at Hostel 33 as staff of the museum led guests on the newly updated tour to Hostel 33. Here they were able to show, for the fist time, the new exhibitions taking place in the hostel interior as well as in the old bucket toilet area, and to receive comment and feedback.

Some images from the day by Leslie Witz and Noeleen Murray. 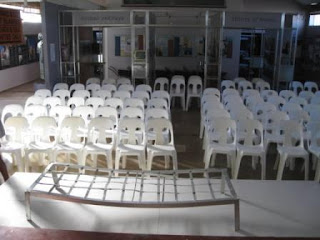 Early on the morning of the 1st of May Staff prepared the hall scape for the celebrations. In the foreground a hostel bed (donated by Board Member Mr. R. Molo) signifies the new exhibitions opened for the fist time on the day. Photograph: Leslie Witz. 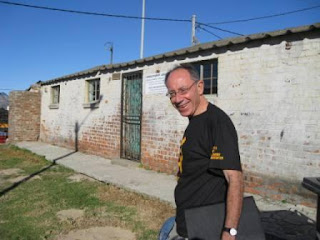 Chairperson of the Board of the Lwandle Museum, Leslie Witz, is visibly excited to see progress on site at Hostel 33 on his arrival before the celebrations. Standing in front of the hostel in the space which had been cleared of paraphernalia such as washing lines and poles, and showing the newly reconstructed wall at the entrance to the bucket toilet area, the building sits more authentically in the context of the hostel row. Photograph: Noeleen Murray. 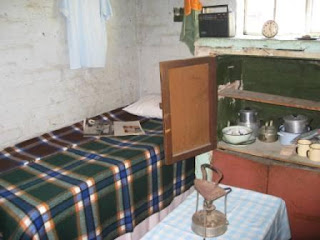 The new exhibition - Recreating the Lived Spaces of Hostel 33 - where hostels rooms were re-inhabited along with input and work by previous residents. Photograph: Leslie Witz. 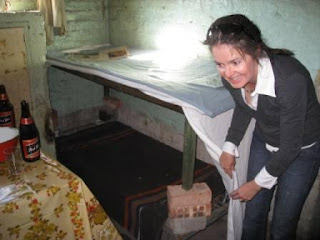 Noeleen Murray shows Leslie Witz how artifacts which have been gathered and donated are now assembled into a depiction of the lived space of the hostel. Here she displays how beds were stacked using brick and paint tins to create bunks as the hostels became overcrowded. Photograph: Leslie Witz. 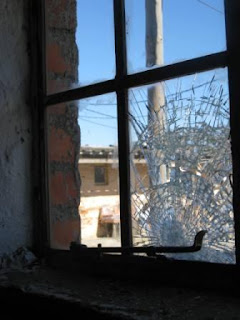 While looking around the new exhibition, we noticed that a window pane had been shattered by a brick thrown at the window, sadly highlighting the security concerns over refurbishing the hostel interiors with goods. Photograph: Noeleen Murray. 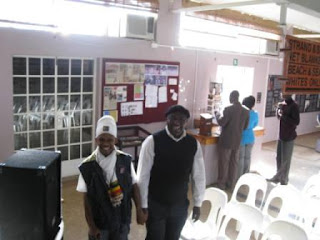 Back at the Old Community Hall, current curator Lunga Smile greets one of his predecessors Vusi Buthelezi, who along with Bonke Thule were there to celebrate the museum's continued existence. Photograph: Leslie Witz. 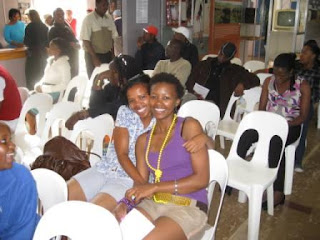 The hall fills up, as visitors gather before the offical programme commenced. Photograph: Leslie WItz. 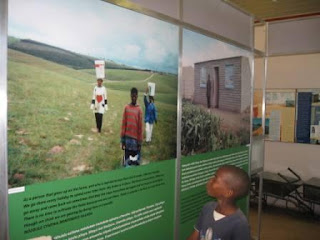 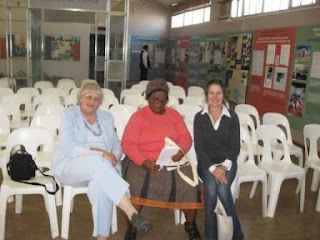 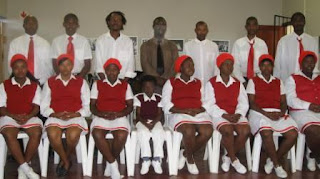 The Uzuko Gospel Choir on stage at the Lwandle Museum, with Simpiwe Konono (centre back row). Photograph Leslie Witz. 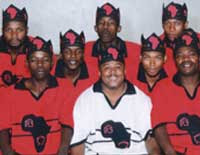 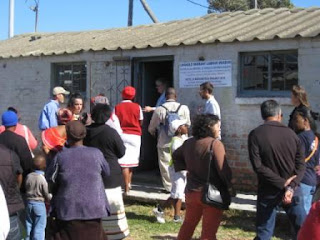 Guests gather outside Hostel 33. On the 1 May 2010, the Lwandle Museum ran four tours - conducted in isiXhosa and English - in keeping with the Museum's multi-lingual approach. The new tours - workshopped over the past few weeks provide a narrative about hostel life based on oral history research with previous residents as a way of creating 'storied lives'. These ideas were first workshopped at LMLM on March 2009 with Ciraj Rassool (of UWC's Department of History and the District Six Museum), who along with District Six Museum colleagues was present to see with work (Rassool, is second from the right in the image alongside Bonita Bennet and Mandy Sanger) Photograph: Noeleen Murray. 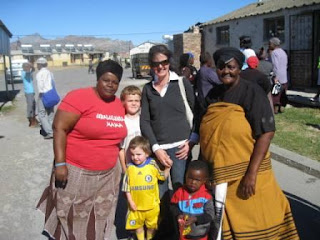 Curators of the new exhibition shown in its first installation on 1 May, pictured outside the hostel as the new tours get underway, Sylvia Monqo, and Kholiswa Ncane with Noeleen Murray and children and grandchildren. Photograph: Leslie Witz. 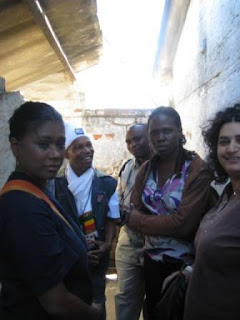 The first tour was Lunga's Tour (conducted in English), which commenced from Hostel 33. Here he is pictured in the bucket system area with Bonita Bennet (far left) and Many Sanger (far right) of the District Six Museum, Stanley Baluku (a Fellow from the CHR at UWC) and Zaina Nabirye of the APMHS at UWC. Photograph: Noeleen Murray. 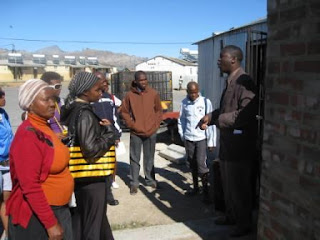 The next tour - Simpiwe's Tour - started with a walk through Lwandle and was conducted in isiXhosa. Here he is photographed telling the story of the restoration of the bucket toilet area before guiding visitors through the space. Photograph: Noeleen Murray. 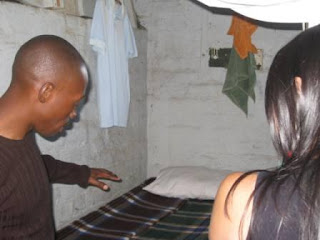 Mphumzi’s Tour - here he is telling Jade Gibson (Post-Doctoral Fellow from UWC) about the ways in which the museum has gathered stories in order to re-inhabit one of the rooms in Hostel 33. Photograph: Noeleen Murray. 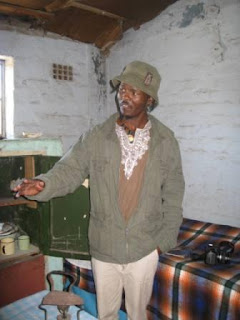 On Lundi's Tour - he impressed visitors including his lecturer in Oral History from UWC - Nicky Rousseau - with his accounts of hostel life, the museum's research and the resultant exhibitions. Photograph: Noeleen Murray. 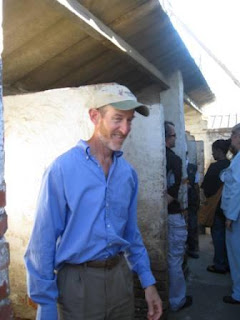 Mark Canning from the Restoration Project's sponsors at the US Consulate leaves the bucket toilet area. Photograph: Noeleen Murray. 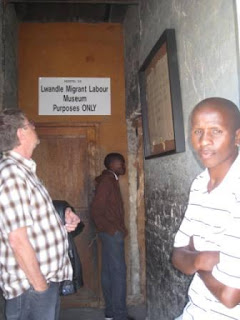 Danie Botha looks at the reconstructed protest sign on display at the entrance to Hostel 33, as neighbour Kadephi Mtiya. keeps a watch at the door. Photograph: Noeleen Murray. 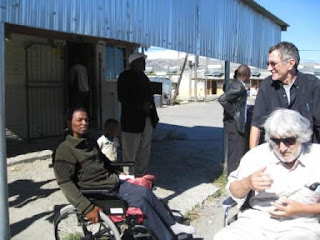 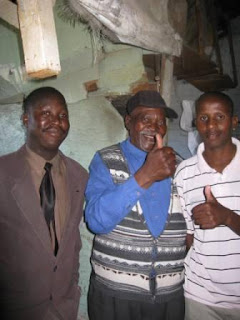 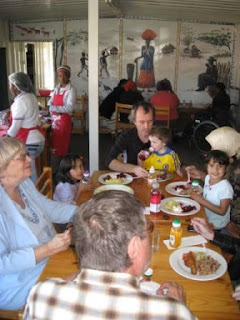