On Saturday 12 March 2010 William Martinson (an East London based heritage architect with extensive knowledge of hostels in the Johannesburg area); Jerry Rogers (an ex Managing Director of a major construction company and a quantity surveyor who has worked extensively in projects in Khayelitsha); and Laura Davies (a fourth year architectural student from London) visited Hostel 33 along with staff from the Museum.

This followed a visit the previous weekend by industrial archaeologist David Worth who has previously worked on aspects of the AECI site and other buildings in the Helderberg area as well as having extensive knowldege and experience of international debates in this field. 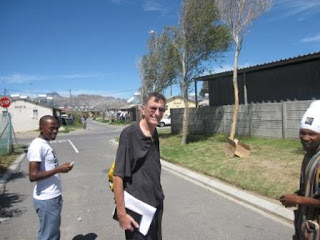 The intention of both visits was to gather insights and expert views on some of the challenges presented by the restoration projects.

Some aspects of the discussions were as follows:


Thanks to William Martinson for sending us his detailed photographs. To view them go to: http://www.flickr.com/photos/lwandle_migrant_labour_museum/
Posted by Noëleen Murray at 10:14 AM 2 comments:

This blog has been created to record the process and debates around the current project for the restoration of Hostel 33 in Lwandle. Hostel 33 forms part of the Lwandle Migrant Labour Museum www.lwandle.com
Posted by Noëleen Murray at 7:59 AM 5 comments: