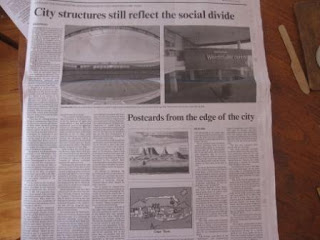 Image from an article published by Noeleen Murray in the Cape Times OpEd section, p11, Friday 7 May 2010.

Text from the article:

The effects of the emergence of the 2010 World Cup Stadium in the landscape of Cape Town have yet to be fully understood over time. Already in its immediate presence, through its modern approach to architecture, its massive concreteness, and set against the iconic backdrop of Table Mountain in the city, it has become the dominant global image of post-apartheid Cape Town.

As is well known from the debates that have recently circulated around its possible proposed locations in the city , this image has been carefully constructed to present a particular view of Cape Town to an international market of 2010 tourists. What is less immediately accessible from this image is the underlying presence of earlier forms of modern architecture in the city built during the years of apartheid. Many of these buildings are less easily transformed into tourist attractions in the post-apartheid city than the slick, technologically advanced modernism of the stadium, and yet their presence continues to affect the daily lives of people across Cape Town.

The effects of modern architecture and urban planning in Cape Town are now well-known and have a darker, more problematic and divisive history in the making of the apartheid character of the city. At the same time certain examples of Cape Town’s modernist architecture have long been considered by local architects as exemplary works of an international architectural design standard. It is perhaps not surprising then that, with the passage of time since 1994, certain modernist buildings are being considered for their heritage worthiness.

There are two striking instances of this in contemporary Cape Town. The first is located in Lwandle near Somerset West where Hostel 33 is being restored as part of the Lwandle Migrant Labour Museum. Hostel 33 is the only remaining migrant labour hostel designed by engineers in the local authorities as part of a compound for single males who worked in the Helderberg Basin and is a reminder of the oppressive policies of apartheid’s migrant labour practices in the city under the infamous Coloured Labour Preference legislation.

The second is the proposed redevelopment of the Werdmuller Centre in Claremont designed by architect and urban designer, University of Cape Town Professor Roelof Uytenbogaardt in the 1970s. Since the time of its construction this shopping centre has been controversial. Built in amongst the largely Victorian architecture of old Claremont subsequent to Forced Removals in the area, its modern architecture was hailed with affection in the 1970s by architects but less favourably received by the broader public.

In both instances the buildings under consideration fall outside of the cautionary sixty year clause contained in the National Heritage Resources Act promulgated in 1999 and arguments have had to be presented to the heritage authorities motivating for their heritage worthiness. What these two projects reveal is the complexity of the histories of their presence in the landscape of the city.

While their shared categorisation as works of modernist architecture is technically correct, as both Hostel 33 and the Werdmuller Centre were designed in accordance with internationally accepted principles of modernist design, albeit in different ways, their emergence in the local context and within the politics of the time in Cape Town are strikingly different. Hostel 33 was designed as part of a planned hermetically sealed off labour compound which later became a township space and the Werdmuller Centre was an individual building commissioned in the 1970s as a shopping centre in a newly formed White Group Area. In both cases the buildings were designed for racially designated Population Groups under apartheid.

The argument for the preservation of Hostel 33 in its original state is for the retention of space that memorialises a key spatial type manifest as part of the apartheid lexicon of segregation. Here the highly administered lives and traumatic conditions under which black men were forced to live in urban areas under the Pass Laws is remembered through the old hostel which is located in amongst the other hostels which were transformed into family accommodation under a ‘Hostels to Homes’ project in the late 1990s. In the walking tour at the Lwandle Museum, Cape Town’s first and only township museum, the hostel is part of a narrative of township life which has its origins in the establishment of inferior racialised spaces in the apartheid city.

The arguments presented for the retention of the Werdmuller Centre however are less obvious within the transformative discourses that circulate in the post-apartheid city. Its status as a building held in high regard by architects has been highlighted by the heritage authorities on whose advice architects have become the ‘affected parties’ in terms of heritage legislation and public process. For architects its status is as a modernist building, cited as an exceptional example of Corbusian modernism. Other arguments which have been made are around the claim that this was a building designed according to ‘timeless’, ‘democratic’ principles, an ideal of a building that was intended to somehow transcend the racialised shopping areas connecting and serving shopping commuters traveling from the Claremont Station to the Main Road.

As it stands today, the Werdmuller Centre is a run down, dangerous and abandoned space in a landscape of signature buildings along Claremont’s much altered Main Road and it has been a commercial failure. Many architects blame the property owners Old Mutual for this decay, damning them for not understanding the buildings idealistically conceived design intentions. Yet it seems clear that the owner’s commission was for a far less idealistic building which would serve Cape Town’s elite white shoppers whose negative response to the building was published widely.

Many of the motivations presented in the defense of the building’s demolition also acknowledge the building’s functional shortcomings. As such, the question of Werdmuller Centre’s future has presented a conundrum for both heritage practice and development. Its democratic intentions (if indeed these can really be considered as such) are not realised in the present and the affection for the building by architects has not yet been reconsidered in relation to its history of strong negative public sentiment.

Paying attention to the arguments presented in these two cases reveals sets of interests at play in the post-apartheid city. There is the continuity with the past in the marginal space of the township where access to housing remains a major issue and the hostel is viewed as a reminder and symbol of the lived experience of apartheid in this context. Here memorialisation is precisely because of the desire to remember the abject living conditions under the migrant labour system.

By contrast in Claremont, the motivations for the preservation of the Centre are motivated by a concerned group of architects’ desire to conserve a building, through remembering its ideas, despite its wider rejection. But of course the contests over Werdmuller’s future are all about its value as prime private property. The wishes of those who would like to see the Werdmuller Centre remain standing are motivated by affection for the building’s architect and for its ‘timeless’ design, despite its failure as a functional building. In fact this timelessness is also elusive as the building is evoking precisely its opposite: nostalgia for high modernist architecture, with its brutalist decontextualised forms, harking back to a specific although not always acknowledged apartheid past.

In the meanwhile, post-apartheid, migrants continue to occupy marginal spaces in the city, battling for access to resources and work, while elite shopping areas are mushrooming all over confidently asserting internationalist models of elite, security controlled public space-making. In attempting to discern the correlation between the migrant labour hostel and the failed vision of an integrated shopping space, new traces of modern internationalist architecture seem, ironically, to persist as the models appropriated for new imaginaries of the post-apartheid city. In another instance, the areas surrounding District Six, are being transformed by new processes of modern development, much like happened in Claremont from the 1970s onwards. Here new modern buildings - glass palaces of sorts - have come to define the outskirts of District Six in Woodstock and in the city centre signaling massive development in Cape Town. It is here that the case of the heritage-threat of redevelopment of the Werdmuller Centre is not isolated, although the arguments around sensitivity are of course entirely different.

Whatever the long term future of the Cape Town Stadium will be, it will most probably be read in terms of the debates that have emerged over these other sites. There is no doubt that its location along the elite Atlantic Seaboard will continue to be the subject of criticism, perceived as a lost opportunity to provide sporting facilities close to the communities displaced by apartheid and forced removals. Yet, at the same time, its presence will also most probably be naturalised and celebrated in the high modernist landscape of Mouille Point and Green Point which it abuts.

Noëleen Murray is an architect and academic, currently a Fellow at the Centre for Humanities Research at UWC)
Posted by Noëleen Murray at 8:31 PM

Labels: Article by Noeleen Murray first appeared in the Cape Times Friday 7 May 2010