Message from LMLM's first Curator Bongani Mgijima on the occasion of the Lwandle Museum's 10th birthday.

On the 1 May 2010, Bonagni Mgijima, Lwandle Museum's first curator, was unable to attend the celebrations, but sent through a letter of support for the Museum's restoration project and continued existence. Leslie Witz read extracts from his letter at the 10th Birthday Party.

The LMLM thanks Bongani for his unwavering support of the museum over the years and for his vision and involvement in founding the museum. 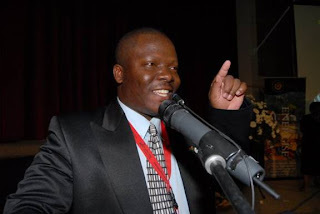 Although not present at Lwandle on the 1 May 2010, over the years Bongani Mgijima has continued to support the LMLM since his formal departure in 2002. Here he speaks at the 2009 Provincial Tourism Awards ceremony in Cape Town. Source: courtesy Bongani Mgijima's Face Book page. 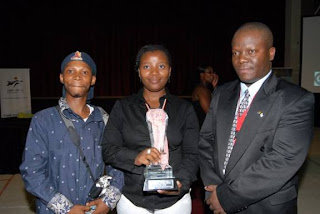 The following is the letter sent though by Bongani on the 1 May 2010.

On behalf of myself, in my capacity as the former Curator of the LMLM and on behalf of the Board of Trustees and staff of the Albany Museum, I would like to take this opportunity to convey our good wishes on the museum's tenth anniversary.

I would have liked to be personally present to witness this great moment in history.

Unfortunately due to unforeseen circumstances I am unable to join you on this moment of
Great celebrations. However even though I am not physically here today with you, I am
Present spiritually.

Ten years is not a long time but for a unique museum like LMLM it is quite an achievement.

When LMLM started ten years ago we never thought it will reach the 1O milestone.

Within a very short period LMLM has distinguished itself as an example of what a post-apartheid museum should be.

Ten years also offers us an opportunity to reflect on the past and to acknowledge organizations that were supportive during the early years. LMLM would not have been possible without the sacrifices and dedication of many people who worked so hard to get us where we are now.

The Arts and Culture Trust of the President then administered by Craig Carbutt, the then Cape Metropolitan Tourism Board headed by Ms Nombulelo Mkefa, the Western Cape
Tourism Board specifically Mthetheleli Hugo and Clive Roman –were all early funders and supporters of the Museum. These organizations deserve special mention because, when I was the Curator of the Museum ten years ago they did not only offer funding but also encouragement.

The History Department at the University of the Western Cape through the Post Graduate
Diploma in Museums and Heritage Studies and the Project on Public Pasts and other programs has always been the godparent of LMLM. Institutions such as the South African Heritage Resources Agency, the District Six Museum, Helderberg Municipality, the Helderberg Radio, the Jewish Museum and Robben Island Museum have always been very supportive of LMLM in its early years.

My own studies for the Post Graduate Diploma in Museums and Heritage Studies, while I
Was still a curator of the museums , were partially funded by the local Rotary Club. Various businesses around Somerset West and Strand were very supportive in terms of donating equipment and photographs for LMLM's first exhibitions. The Councilors of Lwandle specifically the late Councilor Fatyela and the current ward Councilor Sotashe were the early fans of the museum.

The community of Lwandle especially the resident of Hostel33 who gave their permission that the Hostel33 could be utilised as a tourist stopover while they were still staying there deserves a special mention.

A lot has been achieved in quiet a very short space of time. My own formally association with LMLM ended in 2Q02. Some of the people who worked with me such as Kutala Vuba , Noyise Mhlathiand later Bonke Tyhulu, VusiButhelezi and Mbulelo Mrubata went on to become " Groot Krokodils" in the heritage sector. In marking ten years I also hope that provincial authorities in the Western Cape will do the right thing and ensure that LMLM does not have to close its doors in the near future.

In marking ten years I also hope that provincial authorities in the Western Cape will do the right thing and ensure that LMLM does not have to close its doors in the near future.

Before I conclude my message I would like to congratulate the previous and current
Management and Board of LMLM for the sterling work they have done in the past ten years. LMLM looks much better than it was when I was still a Curator.

In celebrating ten Years of LMLM we must also pay tribute to Mama Plummer without whose vision, commitment and dedication LMLM would not have materialised.

I would also like to commend LMLM for the work it has done in restoring Hostel 33. I am aware that this project has been made possible by the partnership forged between LMLM, 'the US Consulate in Cape Town, the National Lottery and the National Heritage Council. This is indeed a partnership that works.

Even though I am not present today to join you in celebrating these fine achievements I will be following the museum blog on the internet with very keen interest.

In only ten years, LMLM has shown us how so much could be done with so little. Our old
well established museums are taking a leaf from the book of LMLM.

May you have a Happy Birthday and live for another 100years!